All the code examples presented in this book are hosted on a GitHub repository. Downloading the code from GitHub can save you a lot of typing, but I strongly recommend that you type the code yourself, at least for the first few chapters. Once you become more familiar with Flask and the example application you can access the code directly from GitHub if the typing becomes too tedious.

In Python, packages such as Flask are available in a public repository, from where anybody can download them and install them. The official Python package repository is called PyPI, which stands for Python Package Index (some people also refer to this repository as the "cheese shop"). Installing a package from PyPI is very simple, because Python comes with a tool called pip that does this work.

Interestingly, this method of installing packages will not work in most cases. If your Python interpreter was installed globally for all the users of your computer, chances are your regular user account is not going to have permission to make modifications to it, so the only way to make the command above work is to run it from an administrator account. But even without that complication, consider what happens when you install a package as above. The pip tool is going to download the package from PyPI, and then add it to your Python installation. From that point on, every Python script that you have on your system will have access to this package. Imagine a situation where you have completed a web application using version 1.1 of Flask, which was the most current version of Flask when you started, but now has been superseded by version 2.0. You now want to start a second application, for which you'd like to use the 2.0 version, but if you replace the 1.1 version that you have installed you risk breaking your older application. Do you see the problem? It would be ideal if it was possible to have Flask 1.1 installed and accessible to your old application, while also install Flask 2.0 for your new one.

Support for virtual environments is included in all recent versions of Python, so all you need to do to create one is this:

Here is the first view function for this application, which you need to write in a new module named app/routes.py:

If you are using the Microsoft Windows command prompt, use set instead of export in the command above.

After the server initializes it will wait for client connections. The output from flask run indicates that the server is running on IP address 127.0.0.1, which is always the address of your own computer. This address is so common that is also has a simpler name that you may have seen before: localhost. Network servers listen for connections on a specific port number. Applications deployed on production web servers typically listen on port 443, or sometimes 80 if they do not implement encryption, but access to these ports requireis administration rights. Since this application is running in a development environment, Flask uses the freely available port 5000. Now open up your web browser and enter the following URL in the address field: 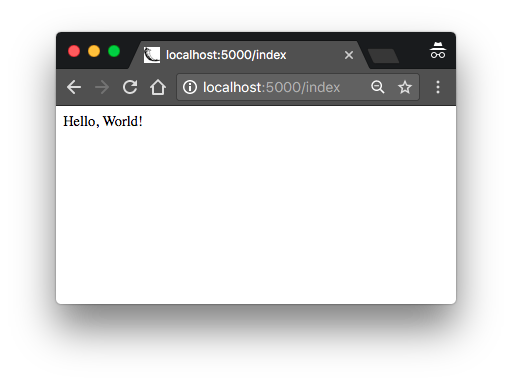 Before I end this chapter, I will do one more thing. Since environment variables aren't remembered across terminal sessions, you may find tedious to always have to set the FLASK_APP environment variable when you open a new terminal window. Starting with version 1.0, Flask allows you to register environment variables that you want to be automatically imported when you run the flask command. To use this option you have to install the python-dotenv package:

Then you can just write the environment variable name and value in a file named .flaskenv located in the top-level directory of the project: