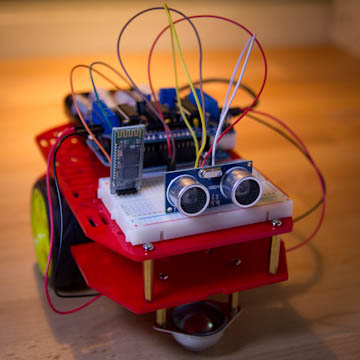 I have been doing software for almost as long as I have memory. I have also been following the open source hardware movement since its inception a few years ago, but I have never found the time or the disposition to attempt a hardware project myself.

Until now, that is.

I have decided to do a small hardware project to get my feet wet, a project that I will fully document and discuss here with the hope to encourage and motivate others to do the same.

Here is the list of articles I have published:

Deciding what to build

For the hardware platform I have decided on the Arduino. This was an easy choice, as this is a platform that is widely used by hardware tinkerers all over the world, which means there is plenty of information and resources available.

The choice of a project that is in line with my (limited) knowledge was also pretty easy to make. I knew I wanted to build a cool toy, something I can impress my kids with. That pretty much reduced the list of options to just one: a robot.

But what kind of robot? A humanoid robot would be awesome to build, but it does not seem like a good choice for a first project. I needed something easy enough that I can complete in a relatively short amount of time, yet hard enough to be interesting and challenging.

After some Googling to see what other people do with Arduinos I have settled on a remote controlled robot vehicle.

As I said before I wanted to make this challenging, so I decided against buying a kit that includes all the parts, the software and the instructions. Instead, I decided to come up with a relatively custom robot design, get the parts I needed and figure out how to build it and program it without any specific instructions.

Here are the features I decided my robot will have:

Does this sound interesting enough to you? I hope it does, it certainly does to me!

With the above feature list in hand I went on to research what parts I needed for my project. Here is the list I came up with: 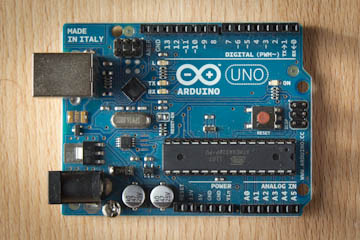 The Arduino board will be the brain of the robot, as it will be running the software that will control all the other parts.

My son had an old Arduino Uno that he ended up not using, so I did not need to buy one. There are plenty of Arduino models or even Arduino compatible boards that can be used. 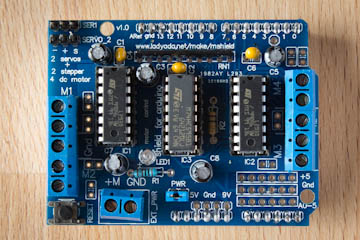 The Arduino board cannot directly control a motor. The tricky part is to be able to make the motor selectively run forward or backwards, which requires swapping power and ground inputs into the motor.

There is a specialized circuit called an H-Bridge that can do this, and there are several implementations of this circuit readily available for the Arduino platform, or you can also build one from basic parts for next to nothing.

Without having much knowledge about this I bought the cheapest motor controller board I've found, a fully assembled version of the Adafruit motor shield at Amazon for $13.99. Later I realized with this board I will need to work around a design issue, so if I had to buy again I would get a more expensive one. More about this later.

My recommendation: Arduino Motor Shield R3, for $33.01 at Amazon. 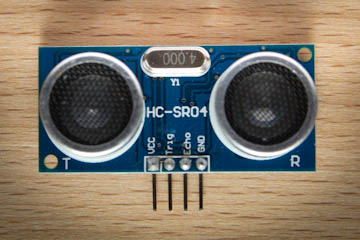 Distance sensors send an ultrasonic signal forward and then wait to receive a bounced signal. Depending on how long the signal takes to bounce back the approximated distance to an obstacle can be calculated. I will use this little device to prevent the robot from hitting walls or other obstacles in its way.

Browsing on Amazon I found a cheap and highly regarded component, the HC-SR04, currently selling for $6.59. This is a nice component that will not only give the robot the ability to see but also give it cool looking eyes! 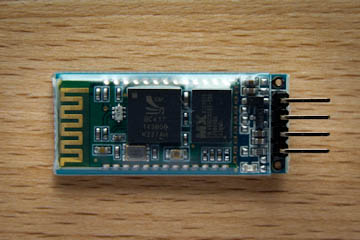 The easiest way to control the robot from a smartphone is via the bluetooth serial interface that all modern smartphones have. The phone will act as a master, so I needed a bluetooth slave for the robot.

Browsing on Amazon I found the BT2S Bluetooth to Serial Slave which seems to fit the bill nicely.

My recommendation: BT2S Bluetooth to Serial Slave, for $14.95 at Amazon.

The Prototyping Board and Cables 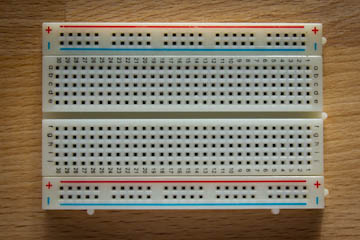 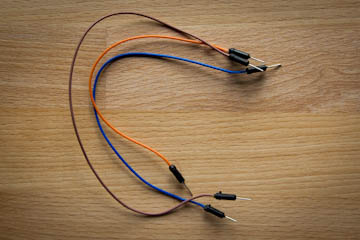 One of the restrictions I decided to impose myself with this project is that I would not do any soldering, so that I can assemble and disassemble the robot to my heart's content without ruining any parts.

Then I needed a platform where I can easily connect all the components together. For this kind of task people typically use a breadboard. Browsing on Amazon I found one from microtivity that comes with a set of jumper cables. 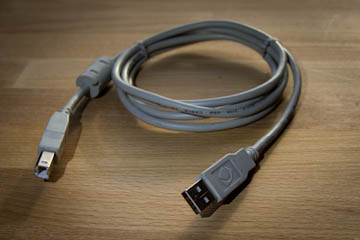 The Arduino board is connected to a computer via a USB port. The USB connection is used to upload software and also can be used as a power source when testing.

I took a cable from an old printer I have, so I did not need to buy this item. If you need to buy a cable, make sure you get the right connectors. The computer side is the standard A-Male, but on the Arduino side you need a B-Male connector. 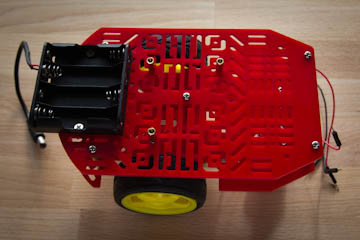 There are many choices for robot friendly vehicles. My only requirements were that it had a large platform where all the parts can be mounted and that it came with the wheels and motors.

In the end I decided to get the Magician Chassis. This is a kit that is extremely simple to build. It includes two motors and a battery box that plugs directly into the Arduino board.

My recommendation: Magician Chassis, for $25 at Amazon.

The total cost for the parts above gets to around $115 if you go with my recommendations, but if you want to save money you could certainly spend less and do more work.

Thank you for reading the first part of my tutorial series, I hope you found it useful.

In the second article I will fire up my Arduino board, introduce you to the Arduino development environment and finally write a few little Arduino programs to demonstrate how to control each of the parts of the robot.

If you have any questions or comments please write then below and I'll do my best to address them.

See you next time!