I'm sure by now you know that I have released a book and a couple of videos on Flask in cooperation with O'Reilly Media. While the coverage of the Flask framework in these is fairly complete, there are a small number of features that for one reason or another did not get mentioned much, so I thought it would be a good idea to write articles about them here.

This article is dedicated to streaming, an interesting feature that gives Flask applications the ability to provide large responses efficiently partitioned in small chunks, potentially over a long period of time. To illustrate the topic I'm going to show you how to build a live video streaming server!

NOTE: there is now a follow-up to this article, Flask Video Streaming Revisited, in which I describe some improvements to the streaming server introduced here.

Streaming is a technique in which the server provides the response to a request in chunks. I can think of a couple of reasons why this might be useful:

Flask provides native support for streaming responses through the use of generator functions. A generator is a special function that can be interrupted and resumed. Consider the following function:

This is a function that runs in three steps, each returning a value. Describing how generator functions are implemented is outside the scope of this article, but if you are a bit curious the following shell session will give you an idea of how generators are used:

The example below shows how using streaming it is possible to generate a large data table, without having to assemble the entire table in memory:

For this particular example if you assume Stock.query.all() returns the result of a database query as an iterable, then you can generate a potentially large table one row at a time, so regardless of the number of elements in the query the memory consumption in the Python process will not grow larger and larger due to having to assemble a large response string.

The table example above generates a traditional page in small portions, with all the parts concatenated into the final document. This is a good example of how to generate large responses, but something a little bit more exciting is to work with real time data.

An interesting use of streaming is to have each chunk replace the previous one in the page, as this enables streams to "play" or animate in the browser window. With this technique you can have each chunk in the stream be an image, and that gives you a cool video feed that runs in the browser!

There are several multipart content types for different needs. For the purpose of having a stream where each part replaces the previous part the multipart/x-mixed-replace content type must be used. To help you get an idea of how this looks, here is the structure of a multipart video stream:

As you see above, the structure is pretty simple. The main Content-Type header is set to multipart/x-mixed-replace and a boundary string is defined. Then each part is included, prefixed by two dashes and the part boundary string in their own line. The parts have their own Content-Type header, and each part can optionally include a Content-Length header with the length in bytes of the part payload, but at least for images browsers are able to deal with the stream without the length.

There's been enough theory in this article, now it is time to build a complete application that streams live video to web browsers.

There are many ways to stream video to browsers, and each method has its benefits and disadvantages. The method that works well with the streaming feature of Flask is to stream a sequence of independent JPEG pictures. This is called Motion JPEG, and is used by many IP security cameras. This method has low latency, but quality is not the best, since JPEG compression is not very efficient for motion video.

Below you can see a surprisingly simple, yet complete web application that can serve a Motion JPEG stream:

This application imports a Camera class that is in charge of providing the sequence of frames. Putting the camera control portion in a separate module is a good idea in this case, this way the web application remains clean, simple and generic.

The application has two routes. The / route serves the main page, which is defined in the index.html template. Below you can see the contents of this template file:

This is a simple HTML page with just a heading and an image tag. Note that the image tag's src attribute points to the second route of this application, and this is where the magic happens.

The /video_feed route returns the streaming response. Because this stream returns the images that are to be displayed in the web page, the URL to this route is in the src attribute of the image tag. The browser will automatically keep the image element updated by displaying the stream of JPEG images in it, since multipart responses are supported in most/all browsers (let me know if you find a browser that doesn't like this).

The generator function used in the /video_feed route is called gen(), and takes as an argument an instance of the Camera class. The mimetype argument is set as shown above, with the multipart/x-mixed-replace content type and a boundary set to the string "frame".

The gen() function enters a loop where it continuously returns frames from the camera as response chunks. The function asks the camera to provide a frame by calling the camera.get_frame() method, and then it yields with this frame formatted as a response chunk with a content type of image/jpeg, as shown above.

Obtaining Frames from a Video Camera

Now all that is left is to implement the Camera class, which will have to connect to the camera hardware and download live video frames from it. The nice thing about encapsulating the hardware dependent part of this application in a class is that this class can have different implementations for different people, but the rest of the application remains the same. You can think of this class as a device driver, which provides a uniform implementation regardless of the actual hardware device in use.

The other advantage of having the Camera class separated from the rest of the application is that it is easy to fool the application into thinking there is a camera when in reality there is not, since the camera class can be implemented to emulate a camera without real hardware. In fact, while I was working on this application, the easiest way for me to test the streaming was to do that and not have to worry about the hardware until I had everything else running. Below you can see the simple emulated camera implementation that I used:

This implementation reads three images from disk called 1.jpg, 2.jpg and 3.jpg and then returns them one after another repeatedly, at a rate of one frame per second. The get_frame() method uses the current time in seconds to determine which of the three frames to return at any given moment. Pretty simple, right?

To run this emulated camera I needed to create the three frames. Using gimp I've made the following images:

Because the camera is emulated, this application runs on any environment, so you can run this right now! I have this application all ready to go on GitHub. If you are familiar with git you can clone it with the following command:

If you prefer to download it, then you can get a zip file here.

After you start the application enter http://localhost:5000 in your web browser and you will see the emulated video stream playing the 1, 2 and 3 images over and over. Pretty cool, right?

Once I had everything working I fired up my Raspberry Pi with its camera module and implemented a new Camera class that converts the Pi into a video streaming server, using the picamera package to control the hardware. I will not discuss this camera implementation here, but you can find it in the source code in file camera_pi.py.

If you have a Raspberry Pi and a camera module you can edit app.py to import the Camera class from this module and then you will be able to live stream the Pi camera, like I'm doing in the following screenshot: 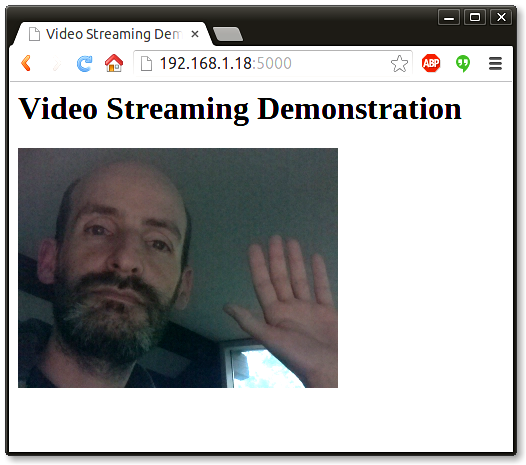 If you want to make this streaming application work with a different camera, then all you need to do is write another implementation of the Camera class. If you end up writing one I would appreciate it if you contribute it to my GitHub project.

When the Flask application serves regular requests the request cycle is short. The web worker receives the request, invokes the handler function and finally returns the response. Once the response is sent back to the client the worker is free and ready to take on another request.

When a request that uses streaming is received, the worker remains attached to the client for the duration of the stream. When working with long, never ending streams such as a video stream from a camera, a worker will stay locked to the client until the client disconnects. This effectively means that unless specific measures are taken, the application can only serve as many clients as there are web workers. When working with the Flask application in debug mode that means just one, so you will not be able to connect a second browser window to watch the stream from two places at the same time.

There are ways to overcome this important limitation. The best solution in my opinion is to use a coroutine based web server such as gevent, which Flask fully supports. With the use of coroutines gevent is able to handle multiple clients on a single worker thread, as gevent modifies the Python I/O functions to issue context switches as necessary.

In case you missed it above, the code that supports this article is this GitHub repository: https://github.com/miguelgrinberg/flask-video-streaming/tree/v1. Here you can find a generic implementation of video streaming that does not require a camera, and also an implementation for the Raspberry Pi camera module. This follow-up article describes some improvements I made after this article was published originally.

I hope this article shed some light on the topic of streaming. I concentrated on video streaming because that is an area I have some experience, but streaming has many more uses besides video. For example, this technique can be used to keep a connection between the client and the server alive for a long time, allowing the server to push new information the moment it becomes available. These days the Web Socket protocol is a more efficient way to achieve this, but Web Socket is fairly new and works only in modern browsers, while streaming will work on pretty much any browser you can think of.

If you have any questions feel free to write them below. I plan to continue documenting more of the not well known Flask topics, so I hope you connect with me in some way to know when more articles are published. I hope to see you in the next one!