Stream Video from the Raspberry Pi Camera to Web Browsers, Even on iOS and Android 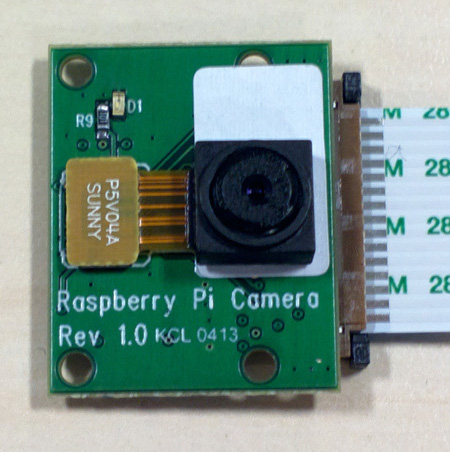 I've been excited about the Raspberry Pi Camera Module since it was announced last year, so I went and ordered one from Element14 as soon as it came on sale.

I have a few ideas for cool things to build with this camera and I will be blogging about them as I get to develop them. Today, I will show you how to transform the Raspberry Pi into a webcam server. You will be able to watch the video stream from the camera on any device that has a web browser. And yes, this includes the iPad/iPhone and Android devices!

The introductory article about the camera module in the Raspberry Pi blog shows a method to stream video from the Raspberry Pi to another computer. This method essentially works as follows:

This is an efficient method of streaming video from the Pi to another computer, but it has a few problems:

This ad hoc solution that the Raspberry Pi Camera team proposes isn't that useful to me, so I went to search for better options.

I think an important requirement for a streaming camera is that you can view it with ease. To me, this means that the stream should be playable from a web browser. Having to run a custom player is a complication, and puts it out of reach of most mobile devices.

There are a few modern streaming protocols for web browsers out there. For example, HLS is Apple's choice, so it has great support on iDevices but not much elsewhere. Another one, called Fragmented MP4 is supported by Adobe and Microsoft, but requires browser plugins from these companies on the player computer, so Windows and Mac computers can do it, but Linux and mobile cannot. HTML5 video is also based on the MP4 format but support is not that great.

Besides, for all the streaming protocols listed above there is a need to have a streaming server that prepares the video for streaming by segmenting it and packaging it, and while there are several open source utilities that can do this for a static video stream, I haven't found any that can do it on a live stream. Note: I have been corrected on this statement, more recent releases of ffmpeg than the binary available for Raspbian can generate an HLS live stream.

So what other options are there?

Motion JPEG to the rescue

I then investigated how IP webcams do it, and a lot of them use an older streaming protocol called Motion JPEG or MJPEG.

What is Motion JPEG? Pretty simple, it's just a stream of individual JPEG pictures, one after another. I was surprised to find that most modern browsers can play MJPEG streams natively.

The down side of MJPEG streams is that they are not as efficient as H.264, which greatly improves quality and reduces size by encoding only the differences from one frame to the next. With MJPEG each frame is encoded as an entire JPEG picture. For my needs this isn't a concern, though.

Continuing with my research I stumbled upon MJPG-streamer, a small open source MJPEG streaming server written in C that I was easily able to compile for the Raspberry Pi.

The following sections describe how I've used this tool to create a very flexible, play anywhere, streaming server for my Raspberry Pi camera.

UPDATE: This section is outdated. Please use the instructions on my updated guide to build and install MJPG-Streamer.

Unfortunately there isn't a package for MJPEG-streamer that can be installed with apt-get, so it needs to be compiled from source.

MJPEG-streamer is hosted at sourceforge.net, so head over to the project's download page to get the source tarball.

To compile this application I used the following commands:

This tool requires libjpeg and the convert tool from ImageMagick, so I had to install those as well.

The makefile does not include an installer, if you want to have this utility properly installed you will need to copy the mjpg_streamer and its plugins input_*.so and output_*.so to a directory that is in the path, like /usr/local/bin. It is also possible to run this tool directly from the build directory.

Setting up the JPEG source stream

The streaming server needs a sequence of JPEG files to stream, and for this we are going to use the raspistill utility that is part of Raspbian. For those that are concerned about performance, keep in mind that the JPEG encoder used by raspistill runs in the GPU, the load required to generate JPEGs is pretty small.

To setup a constant stream of JPEG images the command is as follows:

Let's go over the arguments to raspistill one by one:

Okay, so now we have a background task that is writing JPEGs from the camera at a rate of ten per second. All that is left is to start the streaming server. Assuming you are running it from the build directory the command is as follows:

Let's break this command down to understand it:

Now everything is ready. Go to any device that has a web browser and connect to the following website:

Where IP-address is the IP address or hostname of your Raspberry Pi.

The default website served by the streaming server provides access to several players to watch the stream. I've found that the "Stream" option worked on most devices I tried. For a few that "Stream" didn't show video I went to "Javascript" and I was able to play the video just fine. 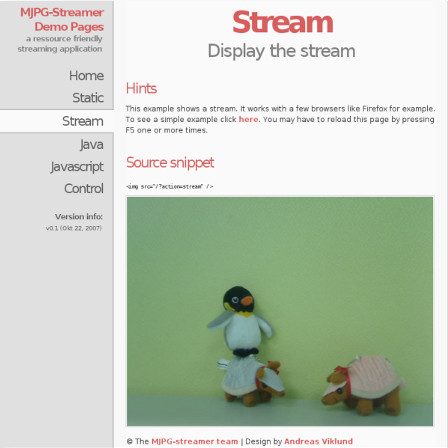 I tested playback of the stream from an iPad, an Android smartphone and a variety of web browsers on Windows and OS X, and I was able to play the stream in all of them.

I hope you find this method useful. Let me know in the comments below if you have a different method of streaming.