I'm happy to announce a new multi-part tutorial that I will soon begin publishing on this blog and several other platforms. The tutorial is titled MicroPython and the Internet of Things and is a beginner tutorial that will introduce you to the exciting world of microcontrollers and small-form Internet enabled devices.

On the hardware side, the tutorial is centered around the ESP8266 chip, an inexpensive, yet unbelievably powerful microcontroller. As far as software, I'm going to show you how to program this little device with MicroPython, a lightweight version of the Python language that is designed to run on devices with limited resources.

I have planned to write this tutorial in six parts, over which I'm going to cover a wide range of topics including:

If you want to have an idea of what you will learn on this tutorial, take a look at the following circuit, which is featured in the last chapter of the tutorial: 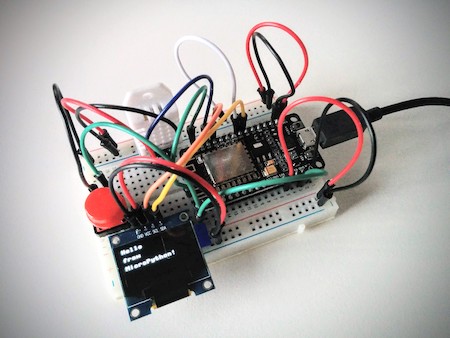 When you press the red button, this device comes to life, reads the current temperature and humidity from a sensor (you can see the sensor in the above picture, it's the white device near the top) and then displays the results on the screen using a custom font and some images and lines to make it look more polished: 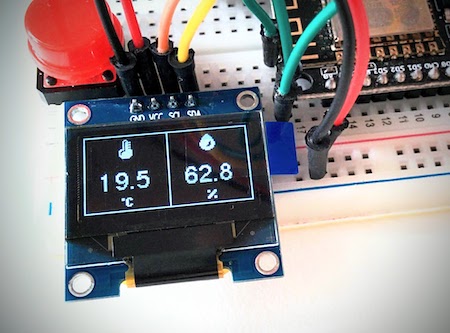 While this circuit may look complex, This tutorial starts from very simple examples and builds up from there. I explain every single connection, and every single line of MicroPython code to make sure that your understanding is complete.

I plan to release this tutorial in several formats, similar to what I did with my Flask Mega-Tutorial:

If you are able, purchasing the ebook or video editions of this tutorial will not only give you a better learning experience, but will also help me dedicate more time to producing blog content. The complete tutorial will be published on all the platforms within the next few days.

I hope you find this an interesting and original topic to learn!