Ignore All Web Performance Benchmarks, Including This One

Posted by Miguel Grinberg under Python.

A couple of months ago there was an article titled Async Python is Not Faster making the rounds on social media. In it, the author Cal Paterson made the point that contrary to popular belief, asynchronous web frameworks are not only "not faster" than their traditional synchronous counterparts, but they are also slower. He supports this by showing the results of a fairly complete benchmark that he implemented.

I wish things were as simple as this author puts them in his blog post, but the fact is that measuring web application performance is incredibly complex and he's got a few things wrong, both in the implementation of the benchmark and in his interpretation of the results.

In this article you can see the results of my effort in understanding and fixing this benchmark, re-running it, and finally arriving at a shocking revelation.

Before I delve into the gory details, I assume you are anxious to see what the results of the benchmark are. These are the results that I obtained when running this benchmark, after I fixed all the problems I've found in it. I have also added several more frameworks that I was particularly interested in:

Note that the above results were generated during an update of this article on October 27th, 2020 that addressed an issue with the P99 numbers. In the spirit of full transparency, you can click here to view the results that were published with the original article. Click here to restore the most up to date results.

Notes regarding these results:

Note that you can sort the data in every possible way by clicking on the table headers. When you are done, keep on reading to understand what do these numbers really mean (and why none of this matters in practice!).

What Does The Benchmark Do?

The benchmark consists on running a web application under load, and measuring the performance. The test is repeated for many different configurations of web servers and web frameworks to determine how all these tools perform under the same conditions.

Below you can see a diagram of what the test does. In this diagram, the gray boxes are constant, while the red boxes represent the parts of the system in which the different implementations that are being evaluated are plugged in. 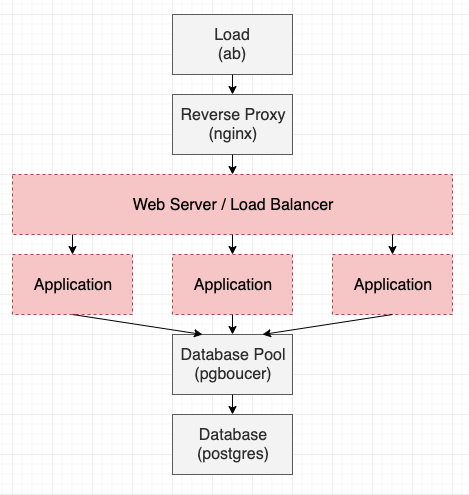 The original benchmark had a nice variety of web servers. I've added a couple more that were interesting to me. The complete list of web servers that I tested is shown below.

For the application components, a small microservice that performs a database query and returns the result as a JSON response is used. So that you have a better idea of what the test involves, below you can see the Flask and Aiohttp implementations of this service:

The get_row() function runs a query on a database loaded with random data. There are two implementations of this function, one with the psycopg2 package for standard Python, and another one with aiopg for asyncio tests. For greenlet tests, psycopg2 is properly patched so that it does not block the async loop (this was an important oversight in the original benchmark).

The implementations of this application that I tested are based on the following web frameworks:

I have not tested every possible pairing of a web server and an application, mainly because some combinations do not work together, but also because I did not want to waste testing time on combinations that are weird, uncommon or not interesting.

If you are familiar with the original benchmark, here is the list of differences in my own set up:

What Do These Results Mean?

There are a few observations that can be made from the results that I obtained, but I encourage you to do your own analysis of the data and question everything. Unlike most benchmark authors, I do not have an agenda, I'm only interested in the truth. If you find any mistakes, please reach out and let me know.

I bet most of you are surprised that the best performing test managed a mere 60% performance increase over a standard Flask/Gunicorn deployment. There are certainly performance variations between the different servers and frameworks, but they are not that large, right? Remember this the next time you look at a too-good-to-be-true benchmark published by an asyncio framework author!

The async solutions (with the exception of the Hypercorn server which appears to be extremely slow) clearly perform better than the sync ones on this test. You can see that overall the sync tests are all towards the bottom of the list in throughput, and all very close to the Flask/Gunicorn baseline. Note that the author of the original benchmark refers to greenlet tests as sync for some strange reason, giving more importance to the coding style in which the application is written than to the method concurrency is achieved.

If you look at the original benchmark results and compare them against mine, you may think these are not coming from the same benchmark. While the results aren't a complete inverse, in the original results the sync tests fared much better than in mine. I believe the reason to be that the database query issued in the original benchmark was extremely simple, so simple that there was little or no gain in running multiple queries in parallel. This puts the async tests at a disadvantage, since async performs the best when the tasks are I/O bound and can overlap. As stated above, my version of this benchmark uses a slower query to make this a more realistic scenario.

One thing the two benchmarks have in common is that Meinheld tests did very well in both. Can you guess why? Meinheld is written in C, while every other async server is written in Python. That matters.

Gevent tests did reasonably well in my benchmark and terribly in the original one. This is because the author forgot to patch the psycopg2 package so that it becomes non-blocking under greenlets.

Conversely, uWSGI tests did well in the original benchmark, and just average in mine. This is odd, since uWSGI is also a C server, so it should have done better. I believe using longer database queries has a direct effect on this. When the application does more work, the time used by the web server has less overall influence. In the case of async tests, a C server such as Meinheld matters a lot because it uses its own the loop and performs all the context-switching work. In a sync server, where the OS does the context-switching, there is less expensive work that can be optimized in C.

The P50 and P99 numbers are much higher in my results, in part because my test system is probably slower, but also because the database queries that I'm issuing take longer to complete and this translates into longer request handling times. The original benchmark just queried a row by its primary key, which is extremely fast and not at all representative of a real-world database use.

Some other conclusions I make from looking at my own benchmark:

I thought it was curious that due to a few bugs and errors of interpretation, this benchmark convinced the original author that sync Python is faster than async. I wonder if he already had this belief before creating the benchmark, and if that belief is what led him to make these unintentional mistakes that veered the benchmark results in the direction he wanted.

If we accept that this is possible, shouldn't we be worried that this is happening to me as well? Could I have been fixing this benchmark not for correctness and accuracy, but just so that it agrees more with my views than with his? Some of the fixes that I've made are really bugs. For example, not patching psycopg2 when using greenlet servers cannot be defended as a choice, that is a clear cut bug that even the benchmark author could not justify. But what about other changes I've made that are more in a gray area, like how long the database query should take?

As a fun exercise, I decided to see if I could reconfigure this benchmark to show completely different results, while obviously preserving its correctness. The options that I had to play with are summarized in the following table, where you can see the configuration used in the original and my own version of the benchmark, along with the changes I would make if I wanted to tip the scale towards async or towards sync:

Let me explain how changes to these four configuration variables would affect the tests:

Are you ready to be amazed? Below you can see a table that compares the throughput results I shared at the beginning of this article to the numbers I obtained by reconfiguring the benchmark for the two scenarios I just discussed. Click on the table headers to sort.

Isn't this mindblowing? Remember that the benchmark is always the same, all I'm doing is changing configuration parameters.

The "Better Async" benchmark shows that all sync tests are near the 1.0 baseline of the Flask/Gunicorn test, while the async tests are 3x to 6x times faster. Even the Hypercorn test, which was very slow in my benchmark, scored a very decent grade. The "Better Sync" benchmark shows the uWSGI tests doing better than the rest, and while most of the async tests ended up above 1.0, looking at these results would not excite anyone into going async.

I hope this article helped you realize now that the benchmark game is rigged. I could easily make reasonably sounding arguments in favor of any of these sets of results, which is exactly what every person releasing a benchmark does. I don't mean to say that benchmark authors are dishonest, in fact I believe most aren't. It's just that it is very difficult to set your personal views aside and be objective when constructing a benchmark and analyzing its results.

As I state in the title, I think the best advice I can give you is to understand the strengths async and sync solutions have and make a decision based on that instead of on what some benchmark says. Once you know which model works best for you, remember that the difference in performance between different frameworks or web servers isn't going to be very significant, so choose the tools that make you more productive!

If you are interested in playing with my version of this benchmark, you can find it on this GitHub repository. 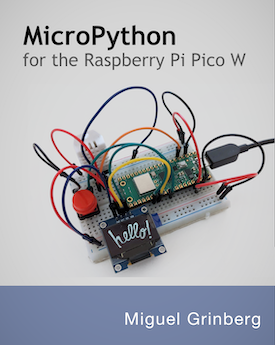