This is the sixth article in my series about the Rhino Steady, a camera stabilizer made by Rhino Camera Gear.

In the first article of the series I described in detail how the Rhino Steady and other similar stabilizers work. In the articles that followed I have shown how I balance a variety of cameras, a medium size DSLR, a lightweight DSLR, a lightweight camcorder, and a point & shoot.

The top part attaches to the little tripod with a standard tripod screw, so the head of this adapter screws perfectly into the Rhino Steady. 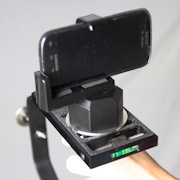 With this problem addressed I can begin the methodical process I have outlined in the previous articles.

Since I know that this configuration is even lighter than the previous one, I'm going to begin with some of the settings I have determined to work for other lightweight cameras. My initial configuration is as follows:

The problem is that with the above configuration the bottom is heavier than the top. With the point & shoot camera I have sandwiched two thin bottom weights between the camera and the mini-steady, but that doesn't seem to be enough. This time I had to attach three thin bottom weights between the mini-steady and the stage to make the top slightly heavy: 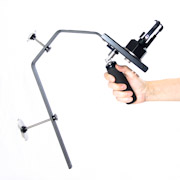 So now I can start adding bottom weights. After adding one thin bottom weight (my only remaining one!) this is the static balance: 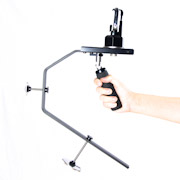 So this is pretty close. The drop test for dynamic balance takes somewhere between one and two seconds, so it is right at the limit I have found to be acceptable.

The alternative drop test, which helps me see how the front and back of the stabilizer balance shows this: 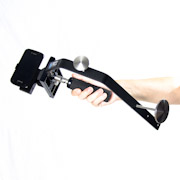 So lucky me, the front is slightly lighter than the back, so adding some weight to the front will also help with with the static alignment problem I still have.

Here is how the static balance looks after adding one thin front weight: 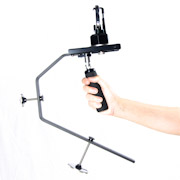 Drop time did not change much, it is still in the one to two second range. And the alternative drop test with the added front weight looks much better: 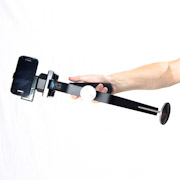 Since I went a bit far on the static balance, I now have to make a smaller adjustment, which I achieve by screwing the bottom weights in: 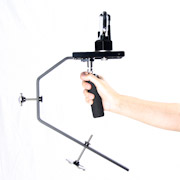 Drop time remains at over one second, and front to back balance still looks good: 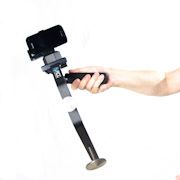 This is the final configuration:

If you are a good observer, you may have noticed that in all the balance pictures the phone was installed facing the wrong way. I realized this when I went to shoot a test. Once I realized my mistake I reattached the tripod adapter the right way and the balance did not change.

This is my last balancing demonstration, I think by now I have done enough cameras to cover almost all camera types. In my next Rhino Steady article I will show example videos I shot with all the cameras I have balanced. Stay tuned!

Thank you for following my Rhino Steady articles.