This is the fifth article in my series about the Rhino Steady, a camera stabilizer made by Rhino Camera Gear.

In the first article of the series I described in detail how the Rhino Steady and other similar stabilizers work. In the articles that followed I have shown how I balance a variety of cameras, a medium size DSLR, a lightweight DSLR and a lightweight camcorder. Today I'm showing how I balance a Canon PowerShot SX230 HS point & shoot camera, which in terms of weight is lighter than any other cameras I have done so far.

Because of the experience I acquired balancing the other lightweight camcorders I already know that I will be using the Mini-Steady attachment to add weight to the top, so I'm not even going to try to attempt balance without it. I also know that the bottom weights will go in the third slot, because that is where the weights ended up with my previous camera and that one is heavier than this one.

To begin I attach the camera to the stage with the Mini-Steady in between, and I setup the initial configuration for the bottom and front weights, both with caps and no additional weights.

My first idea is to drop weight in the bottom by removing the metallic weight caps and replacing them with plastic ones (the RhinoSteady ships with two extra plastic caps for this purpose): 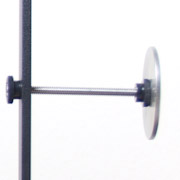 So I replace both the bottom and front weight caps with much lighter plastic caps. But unfortunately, the bottom is still too heavy.

I can't easily remove any additional weight from the bottom, so my only other option is to add weight to the top. Since it is unlikely I'll be using all the bottom thin weights, I take two and sandwich them between the camera and the Mini-Steady: 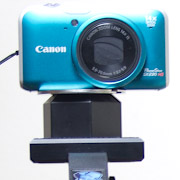 Two thin weights is the most I could add while still having enough of the screw left to attach the camera.

With the two thin weights added to the top I finally have a heavy enough top: 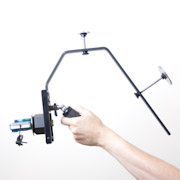 So now I can start to add weights methodically until I achieve balance. This is what I get with one thin bottom weight added: 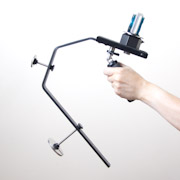 And this is with two: 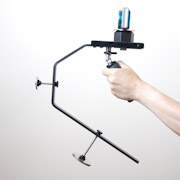 With the addition of a thin front weight the balance improves a bit:

And with two thin front weights it looks like this: 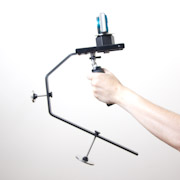 The drop time is in the order of two seconds for both, so given the choice, I decide to go with the two thin front weights, because at this stage it is easier to remove weight by screwing the weights in.

But before I make a final decision, I want to see how the alternative drop test looks like: 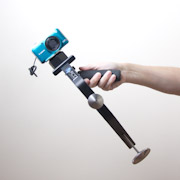 And it looks surprisingly good. If the front wasn't aligned with the back I would have needed to add or remove front weights, but this time I got lucky.

To finish, I screw the bottom weights in until the static balance is perfect: 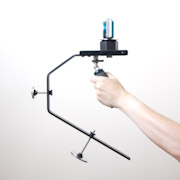 Here is the final configuration:

In the next installment I will continue on my quest to balance all sorts of cameras with an attempt to balance my smartphone!

Thank you for following my RhinoSteady articles.