This is the third article in my series about the Rhino Steady, a camera stabilizer made by Rhino Camera Gear.

In the first article of the series I described in detail how the Rhino Steady and other similar stabilizers work. In the second article I showed a step-by-step procedure to balance the Canon 60D DSLR. Today I will be showing how I balance a much lighter DSLR. If you haven't read the previous articles I recommend that you read them first.

The test subject is my old DSLR, a Canon Rebel XT with a standard kit 18-55mm lens. Yes, I do know that this camera does not shoot video, I'm just doing this for the challenge. Bear with me.

As I did last time with the 60D, I begin by attaching the camera to the center channel in the stage and do a quick and dirty left to right alignment. I also remove all the weights and leave the weight holders with their caps and extended all the way out.

Before I can start trying weights I need to verify that I'm starting with the camera as the heaviest part. For that I just let the system find its balance: 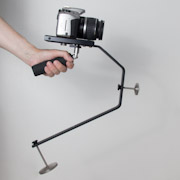 Surprise, surprise! The bottom of the stabilizer is already heavier. Just for kicks I checked the drop time, because if it happened to be in the range that I like then I might had a chance to work something out. But unfortunately the drop time was pretty fast, way below a second.

So now I know that to be able to balance this camera I need to either remove weight from the bottom or add weight to the top.

Removing weight from the bottom is possible, but it makes things more complicated. For example, I can remove the weight caps, but then I would not be able to hold any additional weights in place. I could replace the heavier metallic weight caps with the little extra plastic caps that ship with the unit, but I prefer to leave this for last, since I have a simpler option.

Turns out adding weight to the top is much easier, because I was smart enough to order the Mini Steady accessory with my Rhino Steady. This is just an extra weight that attaches to the camera on the top and to the stage on the bottom: 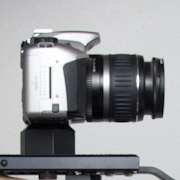 After mounting the Mini Steady I can try again: 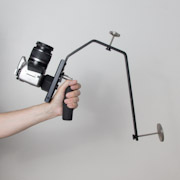 And now it's looking much better and I can start adding weights. With one weight nothing changed much, but here is what I got with two, three and four thin weights: 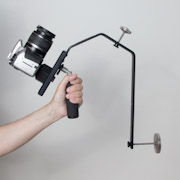 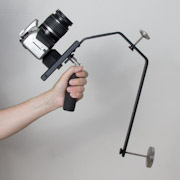 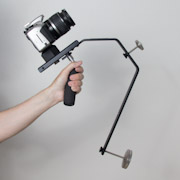 The drop time with four weights was below a second, so I stopped adding weights there. It seems I have exhausted all my options with the camera and the weights in their current positions, since the system balances pretty far from the ideal position.

By looking at the way the system finds balance I decide I have two options:

As I did with the 60D, I try moving the camera first. So the camera goes to channel #4 (counting from the back of the stage). Here is my static balance for two, three and four thin weights again: 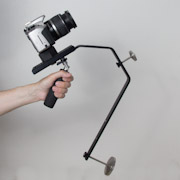 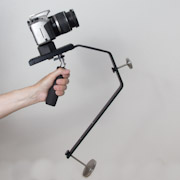 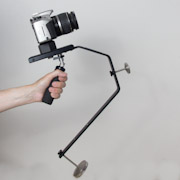 Unfortunately it doesn't really look much different. So out of desperation, I move the camera one more slot forward, the last slot in the stage. Here is how it balances in slot #5 and with no weights at all: 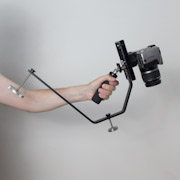 So while in channel #4 the camera appears to lean backwards, when moved to channel #5 it goes completely the other way.

Since I haven't been able to get anywhere by moving the camera, I'm going to go back to channel #3 and try moving the weights to the middle slot. 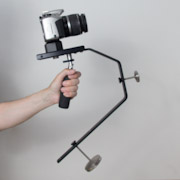 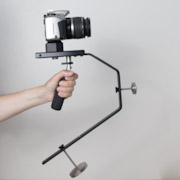 It seems with two weights I'm quite far from the vertical, but less so with three. Since adding a fourth thin weight will ruin my drop time, I decide to try adding the smaller weights to the front. With one and two front thin weights the camera was still tiling up. With three thin weights it tilts down: 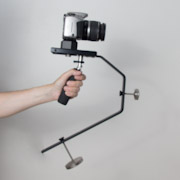 Drop time after this change is at about one and a half second, so it is still okay if I can manage to stop adding weights.

At this point I perform the alternative drop test to check if the front and the back are balanced. For this test I start with the stabilizer in the horizontal position, with the front facing forward instead of up. Here is the result: 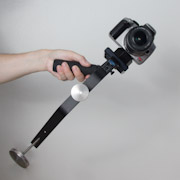 And this looks pretty good. The last correction I need to make is to try to eliminate the tilting down, and for that I screw in the bottom weights until the tilt is gone.

After that I recheck my drop time, and it is about the same as before, so I'm satisfied.

Here is how the camera balances in its final configuration: 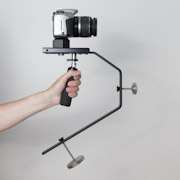 Here are my notes for this camera:

I hope by following my reasoning with these examples you start to get an idea of how my method works. As always, I'm looking forward to hear your comments, specially if you use a different approach.

In the next article I'm going to show how to balance my AVCHD camcorder, which is even lighter than the Rebel XT.

See you next time!