This is the forth article in my series about the Rhino Steady, a camera stabilizer made by Rhino Camera Gear.

In the first article of the series I described in detail how the Rhino Steady and other similar stabilizers work. In the second and third articles I showed a step-by-step procedure to balance two Canon DSLRs, medium and light weight respectively.

Today I will be showing how I balance an even lighter camera, a Canon HG21 AVCHD camcorder. If you haven't read the previous articles I recommend that you read them first to get an idea of the steps I follow to balance a camera.

Before I had developed a consistent method, I tried many times to balance this camera and I could not figure out how to do it. I'm hoping that following the same step by step approach I used with the heavier cameras I will be able to balance it.

Since I know that when I balanced the DSLR in the previous article I had to use the Mini-Steady weight, today I'm not even going to try without it, since my test subject is even lighter than the DSLR.

Before I start, I wanted to note that this is the first camera I balance that has a swivel LCD monitor. To get the best left to right balance I opened the LCD exactly as I intend to use it, since the balance changes when the position of the LCD changes.

Here is how the camera balances when attached to the middle channel in the stage with the Mini-Steady. 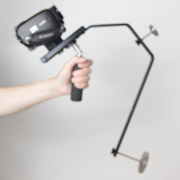 So it is pretty far from where I need it to be. I tried adding one thin weight and the balance didn't change much, but my drop time went below one second. So this does not work.

If I move the camera one channel forward it looks like this: 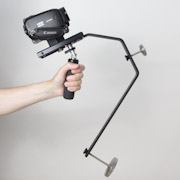 And I still can't get it to vertical balance without getting out of range on my drop time. So again, this does not work.

With the camera on the next channel (the last looking from the back) I still can't get it to balance vertically without affecting my drop time: 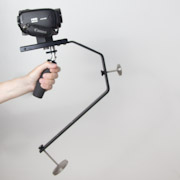 So I exhausted all my options with the weights all the way back. I now move the camera back to the middle channel and advance the weights one slot. This is how it looks with no bottom weights: 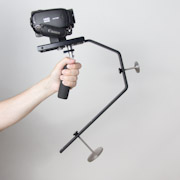 This is much better than before, but I still can't get it to the vertical position before ruining my drop time.

So again, I move the camera one channel forward, and here is how it looks, still with no bottom weights:

This is almost perfect static balance, I just need to add a bit more weight to eliminate the tilting up. My drop time with no weights in the bottom is about two seconds, so it's looking pretty good. Here is how my alternative drop test looks like: 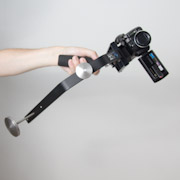 I'm not sure if this is clear in the picture, but the front of the stabilizer drops pointing up a bit, so it is lighter than the back. 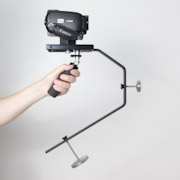 I now have a perfect static balance. The drop time is a bit faster than before, about one and a half seconds. The alternative drop test now looks like this: 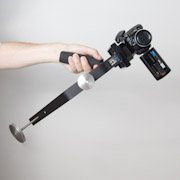 Which is pretty much on the spot. So I'm done!

Here are my final notes for this camera:

Update: after shooting with the above configuration I decided it wasn't working as well as I thought, the device swayed too much when I turned, something I attribute to the one second drop time. So I decided to continue the process to see if I could find a better setup.

I moved the camera back to the middle channel in the stage, and moved the bottom weights to the front most slot. With no bottom weights and one thin front weight the unit balanced slightly past the vertical. After screwing in the bottom weights two centimeters static balance was achieved. The bottom is now lighter than before, so the drop time went to about two seconds. The alternative drop test showed that the front and the back were more or less balanced, so I achieved my goal. The revised notes are below:

For the next article I will be balancing an ultra-lightweight point & shoot.

As always, if you have comments or suggestions to improve my method, please let me know in the comments below.

See you in the next article!