A cheap Bluetooth serial port for your Raspberry Pi 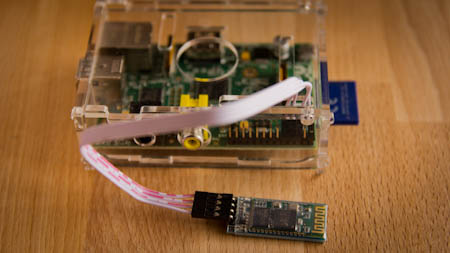 While working on my Arduino based robot vehicle project the idea came to me that the Bluetooth module that I'm using as a remote control receiver for my robot would make a great addition to my Raspberry Pi.

In this article I describe how to enable the Raspberry Pi's serial port to talk to other devices over Bluetooth using this module.

The nice aspect of this project is that it requires very little hardware, most of the action happens in the software side. But of course we do need some hardware, which I list below:

The wiring is very simple and is better explained with a diagram: 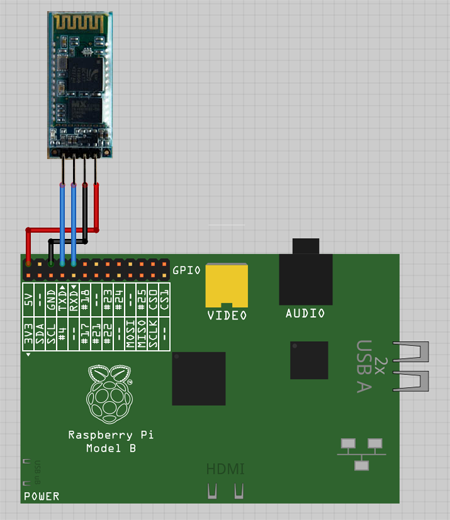 If you prefer to see it in table format, here are the four connections that you need to make:

Note that the TXD and RXD connections between the RPi and the Bluetooth module are crossed, this is what makes one end receive what the other end sends.

I'm going to assume you are running a recent release of Raspbian on your Raspberry Pi. If you are running another OS then you will need to find out how the changes below are done in your system.

By default the Raspberry Pi is configured to write boot time messages to the serial port, and also to start a login console on it. Unfortunately, the default baud rate that the RPi uses for its serial port is 115200 bps, while the Bluetooth module comes preconfigured from factory to 9600 bps.

It is easier to configure the RPi to use 9600 bps so we will try that first. There are two config files that need to be updated.

File /boot/cmdline.txt contains the kernel options that are used to boot the system. In my Raspbian based system this file contains the following options:

The interesting options are console and kgdboc, because these configure the serial port device /dev/ttyAMA0 to 115200 bps. You need to change these two configurations to 9600 bps. After you make these changes the file should read:

The second configuration file is /etc/inittab. Inside this file you have to locate the following line:

This tells the system to start a terminal on the serial port, and again it uses 115200 bps to configure the port. You have to change this line to use 9600 bps:

Remeber that these are configuration files so they are not writable to the default pi user, to edit these files you have to use sudo. As far as text editors, Raspbian provides two, vi and pico. If you don't know either then you will probably be more confortable using pico. For example, to edit cmdline.txt with pico you would run the following command:

The system will ask for your password and after that you will be able to make changes to this file. I recommend that you save original copies of these config files in case you make a mistake.

Connecting from a Bluetooth terminal

If you are using an Android device with BlueTerm then start the app and from the app menu select "Connect device". Android does the baud selection automatically so you don't have to configure it. From a terminal software running in a computer it is likely that you will need to configure the speed, number of data bits per character, parity, and number of stop bits per character. The values you need to use are:

The Bluetooth module comes preconfigured with a PIN number. To complete the connection your computer or smartphone will ask you to enter this PIN. The factory default PIN is 1234.

The LED in the Bluetooth module will now stop blinking and remain lit, indicating that it has made a connection.

And here comes the fun part. You need to reboot the Raspberry Pi so that the new serial port settings take effect. To reboot the RPi run the following command in a local or network shell:

Now watch the Bluetooth terminal on your PC or smartphone while the Pi reboots. Boot messages should be appearing on your terminal, and as soon as the RPi is up you should get a login prompt there as well.

You can now login from your Bluetooth terminal and use the command line prompt as you normally would over a local or network shell.

Below is a short video that shows my Raspberry Pi connected to my Android smartphone:

While you can't deny there is a coolness factor in being able to run a Raspberry Pi from a smartphone, let's be honest, that isn't extremely useful. But having a wireless serial connection into the RPi can be useful for regular applications, for example for debugging or for remote control.

To be able to use the serial port from a user application running in the Raspberry Pi we first need to tell the system to not use it as a console. To do this we need to go back to the two configuration files we touched before. I once again recommend that you back up your config files before changing them, in case things don't work out well and you need to revert the changes.

In file /boot/cmdline.txt we are going to remove the two serial references by taking away the first console and kgdboc sections:

And in file /etc/inittab we will comment out the serial console task:

After making these changes reboot the system so that they take effect. With these changes the RPi will not use the serial port at all, so the port will be free to any application that wants to use it as /dev/ttyAMA0.

If you want to play with sending and receiving data through the serial port then you can install minicom into your RPi using the following command:

And then you can open a terminal on the serial port with this command:

Anything you type inside the minicom terminal will be sent to the serial port, and anything the other side sends will be displayed.

The Bluetooth module comes preconfigured from the factory with a set of defaults, which are:

But these values can be changed by sending special commands through the communication channel. Now that the Raspberry Pi is connected to the module we can try this.

Here is a quick summary of the most useful configuration commands:

One tricky aspect of sending these commands is that the Bluetooth module has a very short timeout, so all the characters in a command must be entered really quickly. The safest way to get the entire command in time is to type it in a text editor window and then use copy/paste to send it really fast.

If your Raspberry Pi session is local, then there is no clipboard support unless you work inside the X environment, so you will need to run startx and then open a Terminal window. If you are using a remote shell over the network then you can use the clipboard in your host operating system.

To send the commands we can use minicom. So let's fire it up one more time:

Note that it isn't necessary to have a connection to do this, so you can do this while the Bluetooth module is in its blinking state.

You now need to use any method to get the string AT into the clipboard, and then hit paste inside the minicom window to send the command to the module.

When you send AT the module should respond with this in the minicom window:

If you get this response then you know that everything is all right. If you don't get a response then for some reason the Raspberry Pi is unable to communicate with the Bluetooth module.

When I send AT+VERSION to the module I get the following response:

To change the baud rate to the fastest rate of 115200 we need to issue the command AT+BAUD8, and the module will respond with:

Because the baud rate was changed now the communication will break, and we will need to exit and restart minicom with the updated speed:

To change the name of the module to MyBT we must issue the command AT+NAMEMyBT, and the module will respond with:

And to change the PIN to 4321 the command is AT+PIN4321 and the response from the Bluetooth module will be:

Note that when the name and/or the PIN change the module requires a power cycle for the changes to take effect.

Also don't forget that if you change the baud rate and later want to reestablish the serial console you will need to change the two config files to reflect the new baud rate you have selected in the Bluetooth module.

I hope this article gives you some ideas to bring new life to the serial port in your Raspberry Pi. If you have any questions feel free to ask below in the comments!